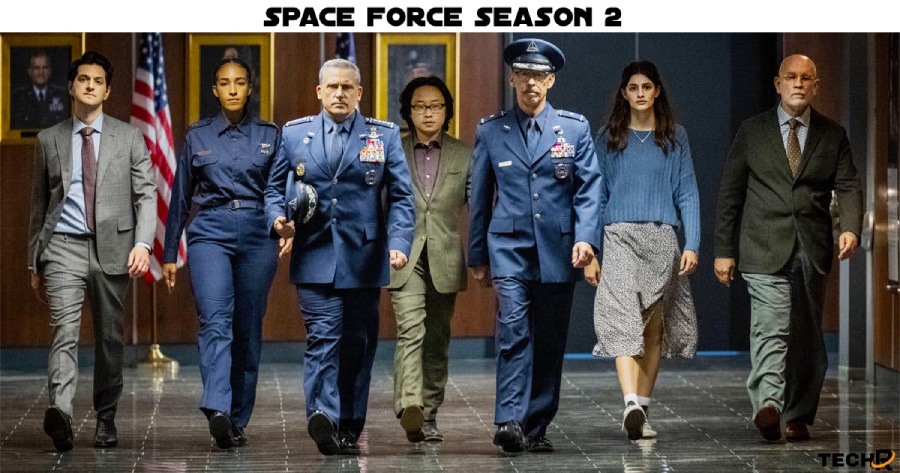 “Space Force” had already become dated by the time it premiered in 2020.

Despite a star-studded cast that included Steve Carell and John Malkovich, as well as all the funding that a Netflix greenlight can provide, the film’s soft jokes about a Trumpian president gone rogue had little impact.

Carell, who co-created “Space Force” with “The Office” producer Greg Daniels, has previously played one of television’s most famous bosses.

But Mark Naird, the Space Force’s commanding general, never really got into gear as a character who alternated between hapless and ruthless.

Even if it never quite materialized, the shape of a good show was there.

Fortunately, “Space Force” was given another season to adjust — and it did, this time with enough self-awareness to improve on its initial promise.

Naird finds himself with even less respect and resources in Season 2, which premieres Feb. 18, than he did when he first got the top job.

After a particularly disastrous moon mission ended the first season, humiliating the department and traumatizing astronaut Angela (Tawny Newsome), the department’s prestige and budget have been slashed to ribbons.

This change loosens both Naird and Carell’s performances, which were previously as tight as a hospital-cornered bedsheet.

Characters like Angela, her on-again, off-again flirtation with Chan (also a writer), Naird’s teen daughter Erin (Diana Silvers), assistant Brad (Don Lake), and publicist Tony (Ben Schwartz, basically playing Jean-Ralphio from “Parks and Recreation” if he went into PR) have more room to flex their comedic sensibilities without shouldering too many narrative twists and turns.

And as irritable but kindhearted scientist Adrian Mallory, Malkovich compensates for his lack of plot with a level of specificity that only he can provide.

(Few actors are capable of making a standoff with an obstinate vending machine as amusing as Malkovich and his furrowed brow.)

Nonetheless, “Space Force’s” decision to ignore its first season’s bolder, broader material means that it misses out on some of the show’s most intriguing possibilities.

Even a task to plan counterattacks to a fictitious alien invasion quickly devolves into a friendly interoffice prank war.

“Space Force” loses its inherent tension and relaxes into itself as a lower-stakes workplace comedy by humbling the characters into bigger underdogs than they already were.

The result isn’t half as sleek or ambitious as the initial season, but the show at least seems much more comfortable in its own skin.

In fact, it almost feels like an inverse of what Daniels and Michael Schur had to do with “Parks and Rec” after its first bumpy season.

Instead of smoothing out the kinks by making its bureaucrat protagonist more competent, “Space Force” saps some of Naird’s power to bring him and his co-workers down to Earth.

WHAT IS THE SPACE FORCE SEASON 2 RELEASE DATE?

Season 2 of Space Force will premiere on Netflix on February 18th.

WHEN IS THE SPACE FORCE SEASON 2 RELEASE TIME?

At midnight Pacific, which is 3 a.m. Eastern, Netflix releases new movies and TV episodes. As a result, Season 2 should be available on the streaming platform.

Read More: The Whitakers Family What Is the Story Behind the This Family?

HOW MANY EPISODES ARE IN SPACE FORCE SEASON 2?

As a result, Season 2 should be available on the streaming platform.

WHAT IS THE SPACE FORCE SEASON 2 PLOT?

General Naird’s nascent organization is coming under more scrutiny, and the pressure is building.

With a new political government in place at the White House, Naird and his beloved but misbehaving crew are given a five-month deadline to establish complete faith in their ability to move forward.

Or will it be demolished and gutted because of its ineptness?

Season 2 should provide answers to these and other questions.

WHO IS IN THE SPACE FORCE SEASON 2 CAST?

Behind the scenes, there have been a number of creative shifts.

The show shifted its shooting location from sunny Los Angeles to rainy Vancouver, British Columbia, where a variety of TV shows and feature films are shot, in order to save money.

Ken Kwapis, who directed A Walk in the Woods and The Sisterhood of the Traveling Pants, has agreed to direct all seven episodes of Season 2.